I was sent a question today asking whether it was possible for Crohn's symptoms to remain when Crohn's was in remission. Here is my response: 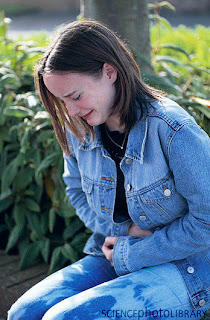 Disclaimer: As you know, my specialism is mind-body interaction and nothing I say is intended to be nor should be construed to be medical advice. You should consult your healthcare professionals for any medical related concerns.
In the meantime, you may find it interesting to watch the videos of the interview I conducted with Professor Peter Whorwell, an internationally recognised authority on the treatment of IBS, pioneer of the use of hypnotherapy in IBS and founder of the South Manchester Functional Bowel Service to which patients are referred by GI specialists all over the UK.  In the interview Peter discusses the role of IBS in IBD, http://www.painsinthebutt.com/2012/02/interview-with-neurogastroenterology.html
According to Peter, if all signs of IBD are gone, the pain could possibly be IBS (Irritable Bowel Syndrome). Crohn's and Ulcerative Colitis (IBD - Inflammatory Bowel Disease) symptoms are almost invariably accompanied by IBS (Irritable Bowel Syndrome) symptoms but for a number of reasons it is difficult to distinguish between IBD and IBS symptoms. The important distinction is that IBS on its own does not involve inflammation: IBS can be extremely painful, commonly involving diarrhoea and / or constipation, bloating and wind. IBS can result from a variety of actions in the gut, so when the Crohn's or Colitis are in remission, IBS could well occur.

I have taught hundreds of people how to relieve their IBS, using a methodology incorporating hypnotherapeutic, psychotherapeutic and NLP (Neuro-Linguistic Programming) techniques. In general it is far easier to achieve relief from IBS than from IBD Crohn's and Colitis because the inflammation in IBD causes additional problems that create a physical loop of symptoms that exacerbate the inflammation. That is in no way meant to diminish the symptoms of IBS, as IBS can be equally or more debilitating than IBD.
Like IBS, IBD is aggravated by different forms of stress in different ways.
Image courtesy of Science Photo Lab.
Posted by Joy at 02:50